Improved survival after introduction of chemotherapy for malignant pleural mesothelioma in Slovenia: Population-based survey of 444 patients

Background. Malignant pleural mesothelioma is a rare tumour with increasing frequency throughout the world. Due to long latency after exposure to asbestos, restrictions in the production and use of asbestos have not yet alleviated the burden of mesothelioma. During the last decade, several trials confirmed the benefit of systemic treatment with drugs such as doublets with cisplatina and gemcitabine or pemetrexed for carefully selected patients in good performance status. The purpose of this survey was to assess the impact of systemic treatment for the whole national population of patients with mesothelioma.

Patients and methods. A retrospective study included all patients in Slovenia with histologically confirmed diagnosis of malignant pleural mesothelioma in the period from 1974 till 2008. Data from the Cancer Registry of Slovenia were supplemented by review of clinical records of the Institute of Oncology in Ljubljana where virtually all non-surgical treatment for mesothelioma was performed. We analysed the incidence, treatment, and survival of patients treated in the era of infrequent chemotherapy (1974-2003, the first period) and after it (2004-2008, the second period).

Conclusions. Increasing incidence, male predominance and increased proportion of older patients confirm that the burden of mesothelioma persists in spite of a 15-years old ban in the production of asbestos. Modern chemotherapy, and in particular treatment with low-dose gemcitabine in prolonged infusion and cisplatin significantly prolonged median survival of patients with malignant pleural mesothelioma in Slovenia. 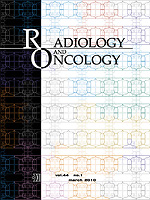